StoreDot The company develops battery assemblies made of a lithium-ion battery and fast-charging components. The company was founded in 2012 in Israel.

In July 2020, the company have proved an ability to scale its technology to other industries. With a help of XFC, it was possible to fully charge a commercial drone, while average batteries powering from 60–90 minutes.

In January 2021 there were produced 1000 batteries, which allow e-vehicle to travel more than 400 km. The charging time remains the same — 5 minutes to full power.

In 2020 Bloomberg New Energy Finance selected StoreDot as one of 10 winners, which is disrupting the energy market.

Faster battery recharging is a major factor in the proliferation of electric vehicles. Accelerating the charge can reduce battery volume and diminish the price for final products. 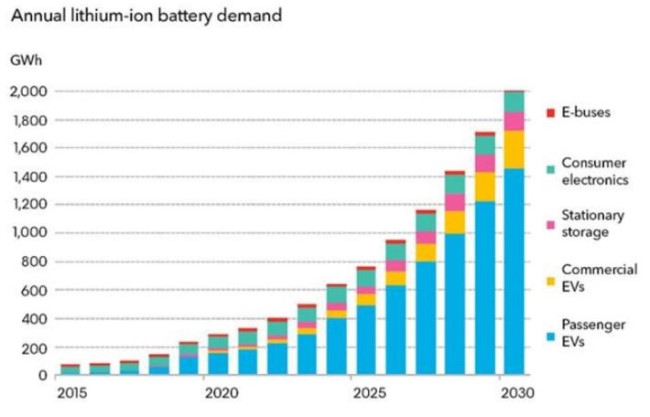 Refusal from hydrocarbons is a trend of the last decade, which is actively funded through government programs. There are a number of state-of-the-art benefits in the United States, including an electric vehicle tax deduction, zero vehicle tax, free parking and reduced charging rates.

In Europe, many countries also have government subsidies for the purchase of an electric vehicle, which range from € 3,000 to € 5,000. Norway, for example, plans to completely phase out internal combustion engines by 2025. In this country, sales of electric vehicles already account for a third of the average annual sales. Germany has a similar target by 2030, France by 2040.

The market outlook after 2030 looks even more impressive. To transfer public and commercial transport to new batteries, it will be necessary to increase the production of batteries by at least 10,000 GW p/ year.

Investors believe that projects in this market have great potential. We can support that opinion by observing the performance of private and public companies in the field. Tesla (NASDAQ: TSLA) has skyrocketed by 950% since January 2020, comparing to 19% of index appreciation. At the same time, Tesla’s market cap is equal to an unbelievable $827 billion. NIO Limited (NASDAQ: NIO), a Chines e-vehicles producer, since January increased by 1400%, capitalisation — $87 billion.

Northvolt, which is building production facilities for lithium-ion batteries, closed another $ 600 million round on September 29, 2020. Which also highlights investor interest in the segment.

Sila Nanotechnologies developing batteries with increased energy intensity, in January 2021, attracted a new round of funding valued at $ 3.31 billion, up from $ 1.04 billion in November 2019.

The major risk is that the product has not yet entered the stage of mass consumption.

The price for lithium-ion batteries has a tendency to diminish due to high competition among producers and the introduction of new technologies. Such market behaviour could put pressure on the company’s profitability.