Klarna develops a shopping payment solution with a short interest-free instalment plan, based on the “Buy Now Pay Later” concept. The company operates under the license of the Swedish Central Bank. 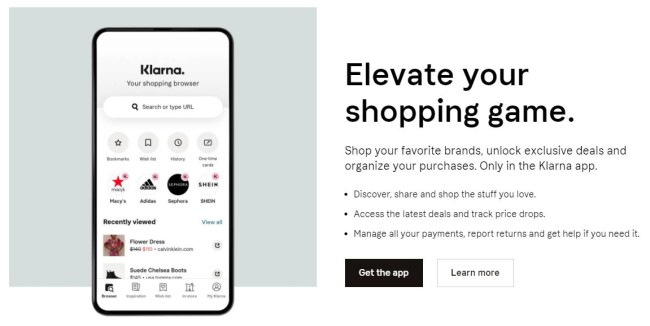 Parameters of investment in Klarna

More than 250,000 retail partners in 20 countries work with Klarna, the number of users exceeds 90 million. It is the largest startup in Europe with a valuation of $45.6 billion.

Recently, the company embarked on an aggressive marketing strategy to build a super app for shopping. The in-app browser allows users to purchase items in instalments from any online store, even if it is not a Klarna partner.

The Klarna service is available not only in online stores, but also in shopping centers. The company also issues its own plastic instalment cards.

In 2021, Klarna raised $1.6 billion in two funding rounds. The capital will be deployed to continue aggressive market strategy and for acquisition of startups. In November 2021, Klarna acquired PriceRunner for $930 million, a startup that developed an app for comparing product prices and reviews.

The Buy Now Pay Later market is valued at $90 billion and will grow at CAGR of 45%, according to Allied Market Research. At this pace of growth it will become a trillion-dollar industry by 2027.

Both venture capitalists and investors in the stock market are showing interest in this market. One of the main representatives of BNPL market is American company – Affirm, which has increased its capitalization by 145% in the last 6 months alone.

BNPL is also interesting for large corporate investors. Pay Pal acquired a $2.7 billion startup Paidy, Square in the process of acquiring Australian Afterpay for $29 billion. Bank of America predicts that major BNPL players will process transactions worth between $650 billion and $1 trillion by 2025.

Klarna’s main competitors are the already mentioned Afterpay and Affirm. It is worth mentioning that both companies are public.

Klarna is the market leader and at the same time undervalued in comparison to the competitors in some metrics.

The index we created is compiled from 50% of the Valuation/ Transaction volume metric and 25% each of the other two metrics. According to this index, Klarna is undervalued to the market by 60-70%.

Sebastian Siemiatkowski is the founder and CEO of Klarna since 2005. Prior to that, he worked for 8 years in the sales department of Djuice Uppsala, including sales director position.

According to the CEO of Klarna Sebastian Semyatkovsky, the company sees the public listing as a natural step in its development, but so far it is not preparing for the IPO. We do not rule out that Klarna may raise another funding round prior to the public listing.

In any case, the company’s IPO should become one of the largest placements and receive a lot of attention from stock market investors. The company’s valuation after a round or public listing can increase by 60-70% or more.

Risks of investing in Klarna